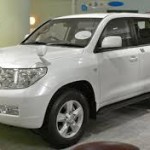 Toyota, the Japanese automotive giant Toyota took the initiative to redesign Land Cruiser 200 with Toyota’s Safety Sense P. Post remodeling, Toyota has claimed Land Cruiser as one of its kind of vehicle that comes with active safety package.

Toyota Safety Sense P is specially designed with Pre-Collision system. This system comes with pedestrian detection, using single lens camera and millimeter wave radar in order to keep a tract of the pedestrian. The millimeter wave radar is often utilized by the radar Cruise control to check the preceding vehicles and their speed limit, which helps in adjusting the speed of this vehicle. Again, to prevent collision, Safety Sense P sends out audio and visual alert whenever required, apart from brake assistance. When the vehicle is being operated between 10 to 80 km/hour, users can also make use of the automated brake operations.

The driver can also check the surface of the road ahead to keep the driving in control, with the special safety feature to check under-the-floor view. Furthermore, Toyota Safety Sense P is geared up with Lane Departure Alert, which is used to find the lane markings in yellow and white. The Automatic High Beam helps in checking the road conditions during nighttime. The feature of new Land Cruiser 200 is built for safe driving.

Facebook Is Not Going To Shut Down On March 15th

For the past few days, there has been rumor going around in the web that the popular social networking website is going to shut down on March 15th. But the CEO of Facebook is stunned to hear the news as there was no official confirmation from his side. He asked the readers that whether they […]

Facebook Users Can Enjoy Skype-Powered Video Chat From Next Week

This Wednesday Mark Zuckerberg already told to the media about his plans to unveil “something awesome” next week. Though his plans to make the official announcement seems to be spoiled as Mashable has reported that this popular social network will perhaps launch a Skype-powered video chat platform designed by Facebook’s Seattle team.

High Demand of Skyfire iPhone Forces The Company To Withdraw

It has been only few hours of the launch of Skyfire iOS app and within this short span of time the overwhelming demand for this app has compelled Skyfire to pull it back from App store. In the Skyfire blog Robert Oberhofer, the Senior Director of Product Management of Skyfire Labs has mentioned that they […]