“Orange” is a Telugu film which has been directed by Bommarillu Bhaskar. This Friday South super star Ram Charan’s much awaited romantic comedy flick “Orange” finally hits the theaters across the country. After going through the “Orange” review it seems that the movie will set the box office on fire. 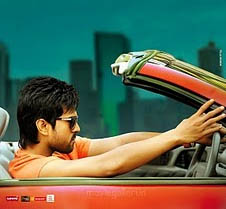 It is very entertaining movie which has attracted the young audiences to the theaters. It seems the movie already is on its way to become another blockbuster.

In the movie Ram Charan plays the lead role of a flirt. Beautiful and charming actresses Genelia along with Shazahn Padamsee will be seen in the female lead characters. Shazahn Padamsee is the daughter of famous ad guru and theatre personality Alyque Padamsee and known pop singer Sharon Prabhakar.

As per the Orange review, the story goes as follows; “Rohith” the character that Ram Charan plays in the movie, thinks that he can make any girl fall in love with him. In the meantime he truly falls in love with Genelia playing as “Keerthi”. Though Genelia feels the same way, but could not express her feelings to Rohith. Thus the movie slowly moves towards the climax. There are lots of drama together with mind blowing dialogues and music. The film is made just for fun and pure entertainment.

If you have seen the movie yet, please share your opinion with us.

See the movie clippings below:

The latest participant in the Jhalak Dikhla Jaa show was none but the infamous Yana Gupta, who has hit the headlines recently by appearing panty less in a charity show in Mumbai. Though pictures of her panty less lower asset hit the headlines in all the media nationwide, she seemed to be quite undisturbed over […]

“I’m More Exposed Here Than I Was In My Playboy,”Kim Kardashian Regrets

After the controversial W Magazine Kim Kardashian silver paint pictures, can anyone believe that the curvy chic Kardashian, the popular reality star has got any lesson? Though she claims so. Kim Kardashian, came in the spotlight in pop culture after a sex tape with her boyfriend at that time suddenly got publicized.

How Can Sex And Suspense Be Away From Ragini MMS Review?

Ragini MMS is a movie from the Ekta Kapoor, Balaji Telefilms banner. A look into the Ragini MMS review shows that the movie is centered round a young couple named Ragini and Uday. They went to a friend’s farmhouse in the outskirts of Mumbai and their basic motive of going there was nothing but doing […]