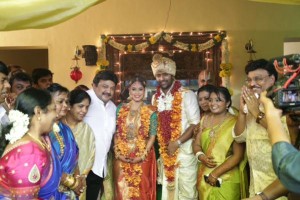 Tamil actor Shanthanu Bhagyaraj married popular VJ Keerti on 21st August. The wedding was attended by the close family members of bride and groom along with some of the eminent stars of Kollywood. The wedding took place in Chennai, according to the Hindu rituals.

Shanthanu is the son of veteran actor-director K. Bhagyaraj, started his acting career with Sakkarakatti in the year 2008. Since then, there was no looking back for Shanthanu, as his acting skills were applauded with several awards and recognition. On the other hand, Keerti Suresh is the only daughter of famous choreographer Jayanthi Vijayakumar, became a household name due to her popular television show, ‘Maanadu Mayilaadu’. 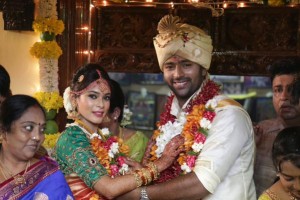 The couple was blessed and wished by many notable personalities of the Tamil Film industry, including Ilayathalapathy Vijay, Kumar Bhagarappa, Jyothika, Mani Ratnam and his wife Suhasini, Sivaji Prabhu, Venkatesh, Vijaykumar, Sarath Kumar and wife Radhika. The wedding was kept a close affair amongst family, relatives and friends. The grand reception on 22nd August of Shanthanu wedding is yet to receive many prominent names in the industry. The reception party seems to have been another star studded evening in the city. Shanthanu marriage photo are doing the rounds over the internet.

A Dinner Date For Justin Bieber And Selena Gomez

Bappi Lahiri the popular music director has been appointed as the goodwill ambassador of UNESCO Nepal’s “education for all” in a unique honor. The chief Patron of national federation of UNESCO clubs, centers and Association of Nepal, Vinod Khetawat said they feel Bappi Lahiri’s words will be accorded the highest importance as Nepal always held […]

Everyone around the corner is excited about the Ghost Hunters Live Halloween 2010 which will be shown on SyFy TV Channel at 7pm. The celebration for Halloween is going on and therefore people who enjoy this fun fest that spreads spookiness really love watching the little kids roaming around everywhere in their creepy Halloween costumes.